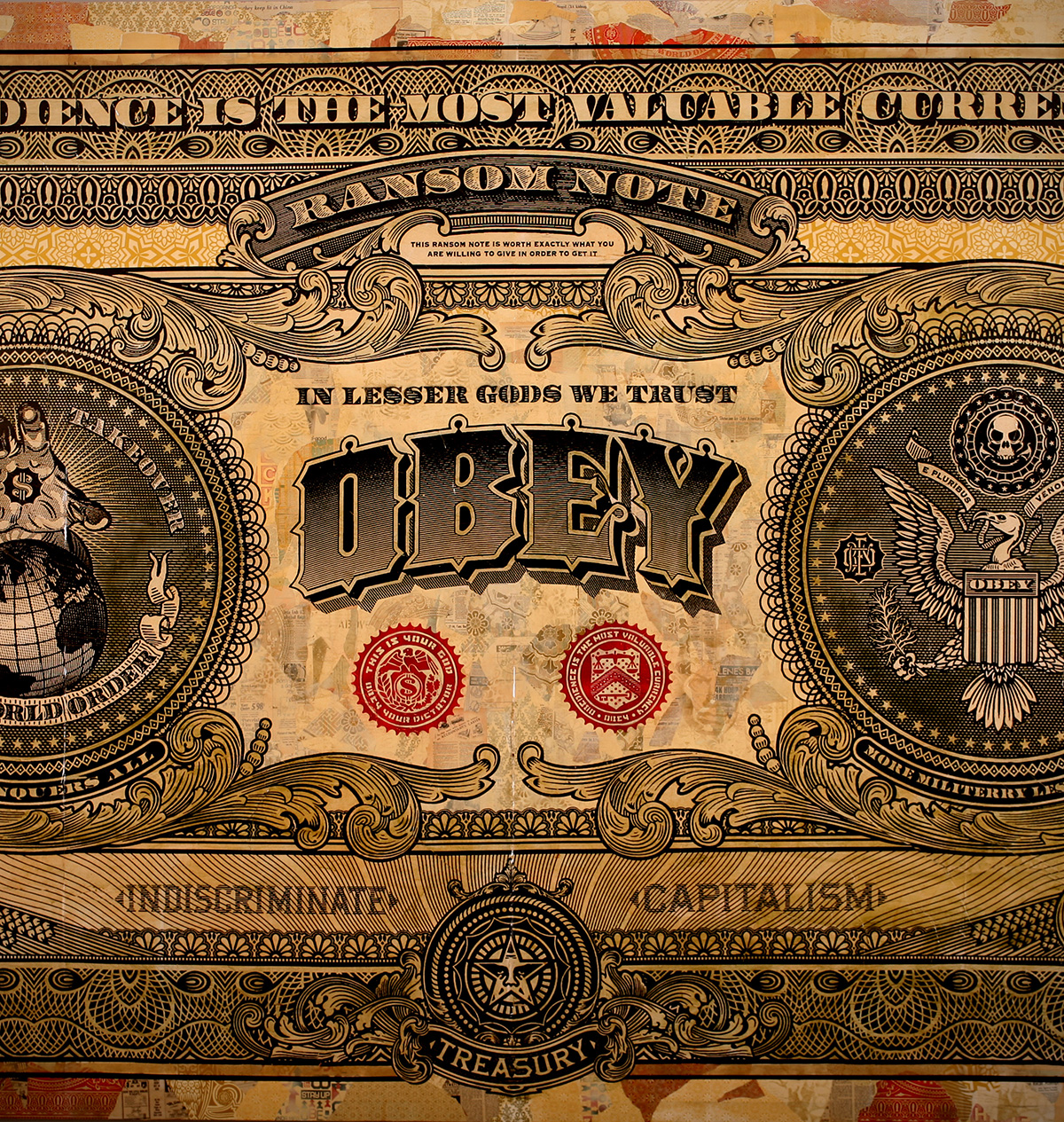 From the bottoms of skateboards to London billboards, chances are you’ve caught a glimpse of the face of OBEY. There’s no telling where 38-year-old artist Shepard Fairey will hit next with his installations: a Wyoming water tower, the New York City subway, a dive bar in Chicago. You can’t find a pattern to his targets. Wherever he plasters them, one thing is certain – the live-and-die-hard Fairey is a man on a mission of grandeur.

Originally from South Carolina, Fairey attended the Rhode Island School of Design and promptly moved out to the West Coast to be with others who shared his initial passion in life, skateboarding. The long path to the OBEY kingdom began in 1989 as an inside joke. Fairey was teaching a friend how to stencil, and he suggested his friend use an Andre the Giant wrestling photograph to practice with. His friend refused, claiming it was “stupid..” Not one to let his intelligence be questioned, Fairey began his self-proclaimed “experiment in phenomenology..” He created an image of the actor/wrestler’s face, and began putting up stickers and stencils of the image all around the world in efforts to create a phenomenon.

Fairey’s experiment has not only worked, but it’s extended far, far beyond his expectations. He’s gone from sleeping in his car and illegally plastering his work anywhere he deemed worthy (racking up a solid 13 arrests in the process) to running his own design studio, Studio Number One. Recent items on his agenda include his OBEY clothing line, designing an anniversary bottle label for Kenwood Vineyards, and stamping his image entitled “HOPE” around the country as Barack Obama’s official campaign poster. He’s assumed his position of an artist of great influence and continues to risk his life for his art.

Do you think the timing of when you started putting up the stickers made a difference in the way that OBEY took off?

I’ve been doing this for almost 20 years, so it didn’t happen quickly. It took me just going out and putting a huge amount of stickers, posters, and stencils up, as well as sending materials out all over the world to people. Just sending free stickers out. A lot of people won’t send something out for free.

I think that the key to my success was really just persistence. Also, the fact that I started before the Internet in some ways helped, because there was this organic feel to it that it wasn’t a manufactured digital phenomenon. It was real, it was grassroots, and if you had a physical sticker then you had to know someone who knew someone. It had to trickle down to me somehow. There was sort of a feeling of being an insider to the sticker campaign, which excited people more. Now, you can just download an image easily. It’s hard to be sure, because I’m not trying to start a phenomenon from scratch now. I know that once the Internet did take off, a lot more people found out about what I was doing quickly.

I’m glad that it happened before the Internet because I was motivated to really do the footwork. I think that with anything, people are impatient, and if they don’t succeed right away, get famous right away, get rich right away, a lot of times they just give up. I was broke for the first half of my whole sticker campaign. I couldn’t even afford to go to a city and rent a car or stay at a hotel for the first ten years. I used to just drive everywhere and sleep in my car and put posters up all night. I’m living proof that if you stick to something it can succeed.

What helped you keep the faith?

SF: Well, I’m not quite as hardcore now as I used to be. I have a family. I don’t really know where the drive comes from, but I’m a diabetic so I think I have this fear of an early death and I feel like I need to get a lot done. Also, a lot of other artists that I talked to have this need to create in order to validate their existence, and in a sense I feel like as a human being I only have worth when I’m creating. I think it’s maybe a character flaw, but in my career it’s been a strength. The whole punk rock do-it-yourself thing was always about trying to turn liabilities into assets; if you can’t play  well, play louder and more distorted and appeal to the aggressive side of things. With my art, if I didn’t have the money to do really lush pieces, then I’d figure out how to make two-color screen  prints or Xeroxes look good. This very simple but bold style came out of necessity, and I’ve turned it into a signature look that works for me. 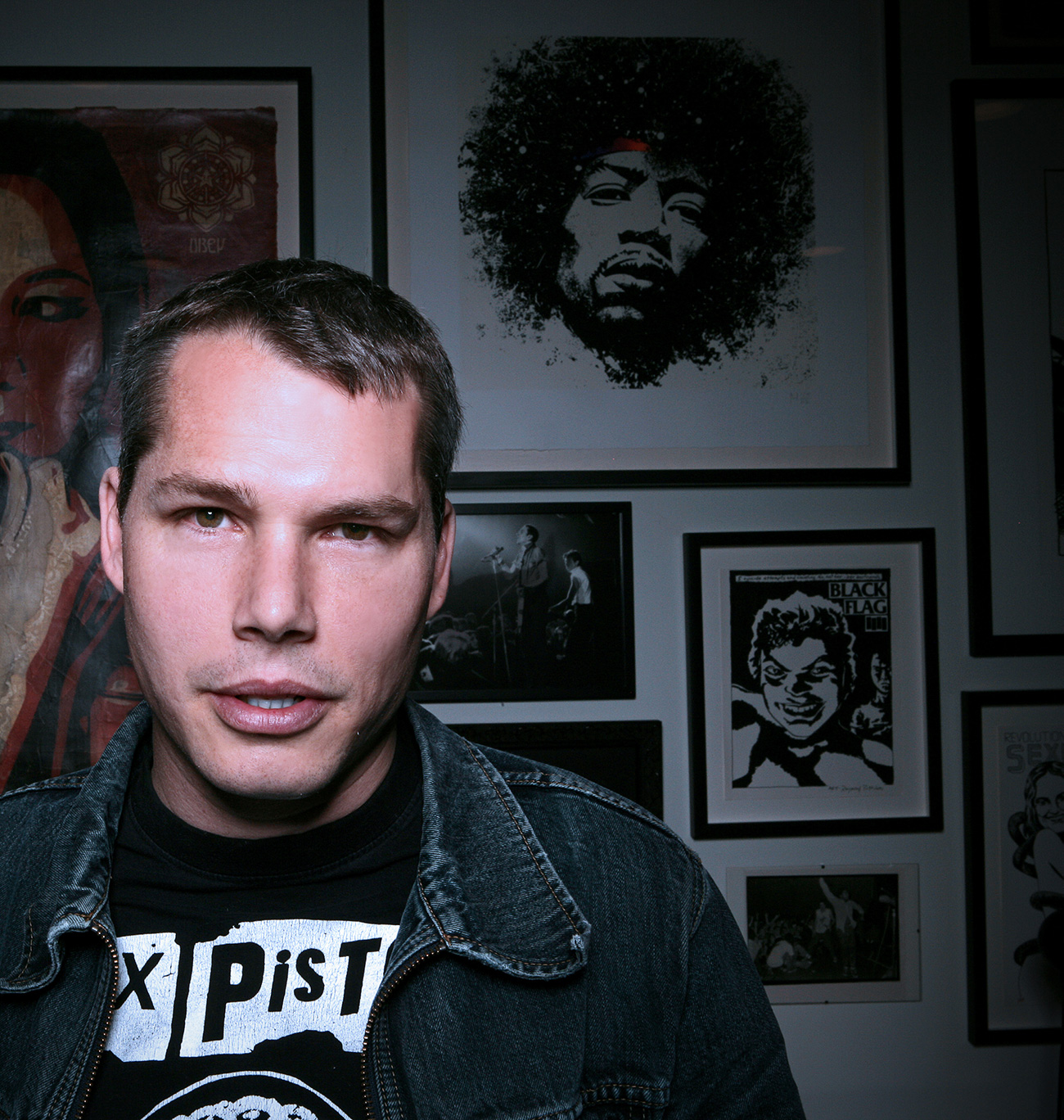 It was clear that you wanted to be huge, but is there a point where you’ll get so huge that your art will be distorted beyond its original means?

It’s gone way beyond my expectations. I think the possibility of [OBEY ] getting too big on my terms isn’t an issue, but once something has a life in the public domain, it can be embraced by ignorant frat-boys that I don’t have any connection to, so that’s always there. But that’s a danger that you run with anything once it enters the pop- culture realm. Sometimes I get email complaints from people that are like, “When I first started wearing OBEY t-shirts at my school, none of the jocks knew about it, and now it’s gotten trendier!” How am I supposed to control that? Attach a tag that says “No jocks allowed to buy this product” to the clothes? If there was the “you have to have done a certain amount of graffiti, or skateboarded, or been in a punk band” criteria then there would be a lot less shirts out there.

You’ve certainly taken many chances in your life. Are you taking as many risks these days?

A couple of friends and I rented a van and went out almost every single night for two weeks, staying out all night long and putting stuff up. I’m into calculated risks, but every now and then something happens that’s unpredictable. I’ve been to London before and I’d noticed this billboard on the roof of a building and I told myself I had to get that spot at some point. You see it right when you come into London from the airport. It was a slanted roof, and the billboard had been pulled off, but the platform was still there and it was just a blank wall with some graffiti down low. I wondered why there wasn’t more graffiti up there, there were just a couple old pieces that were really faded, but it looked easy to get to.

I found the parking place, climbed the fences, got up to the balcony, climbed up the drainpipe and got to the roof. The roof was steep and it was slate, and the moment I tried to get up to the roof I realized that it was super slippery. There was a thin film of moss on the roof, so if you try to get on it you just slip down. There was a small brick wall that was a little bit higher at certain junctures, so I was able to swing up and grab on to one of the fire brakes. The balcony was narrow and it was a two-story drop down to a parking lot. I grabbed on to the top of the fire brake – there were stones and bricks on it – and as I was trying to pull myself up, the entire stone started to come off the roof. I had to jump and grab the gutter and pull myself back up. If I hadn’t been able to grab that gutter fast enough, I would have fallen backwards onto pavement. I just took a deep breath, checked some of the other bricks to make sure they were stable, and got up there. Then I spilled a lot of the glue on the roof so it was even more slippery than before. That’s when I realized why there wasn’t more graffiti up there…really, really sketchy spot to get to. I was like, I’ve gotten this close to it, I’m gonna get it. I got up there and I did an eight-foot icon face and it’s still running. I’m sure it will be for years.

Once the piece was up, it felt awesome to know that no one’s going to go through what I went through to do that. I hope when people see pieces that are in really crazy places like that, they realize I’m extremely passionate about what I do. The passion of the application energizes the image.

Do you feel like you’ll be going out on the streets for much longer?

I still get a thrill out of it, big time, but I wouldn’t want to be paralyzed or dead and have my wife and our two young daughters dealing with that. I’ve been arrested plenty of times but it still doesn’t stop me from going out and postering, potentially getting arrested. I’m a little more cautious. I used to just do stuff in a very blasé way, if I got arrested, whatever…

So, what’s coming up?

I’m really excited that we’ve opened our new gallery here, Subliminal Projects. We’re going to be doing shows every two months. The first show is this French stencil artist called Blek le Rat who was an inspiration to me. He started stenciling in the streets of Paris in the early ‘80s. Also, I have a book coming out named after the show that I did in New York last summer, E Pluribus Venom. It was my biggest show that I’ve done—over 130 pieces, some really huge installations and a lot of work on the streets of New York. The book has all of the work from the show, as well as from the streets and in the gallery. I’ve also got a big retrospective show at the Institute of Contemporary Art in Boston this summer.