I understand you are up for a Grammy and Nama and you won best song and video for the Native American music awards in 2016? First of all, congratulations and it sounds like you’ve got a lot on your plate right now, what’s that like?

Thank you for acknowledging, the Native American Music Award Win in 2016, for Best Music Video titled “Rez Life”. I am currently busy with my music promotion and day job doing Alcohol prevention work. Right now I have my album “Warrior” entered into the Grammys and NAMA (Nammys). I decided to enter into the Grammys to learn the process of entering an album to gain experience and network. I understand this platform has the best of the best and hopefully one day I can compete. In the mean time I’ve been working hard to bring home an Award at this year Native American Music Awards in Seneca, New York. This year I released two albums and few music videos.

The song you’ve entered into the Native American music awards this year is called Warrior, I love the song, and can you tell me what it’s about?

Warrior is a song dedicated to the Water & Land Protectors that make a stand for Human Rights. Most times Natives get silenced when it comes to speaking up for our lands and waters. Right now, due to oil spills and water droughts, there is more people listening to what we have to say. I attended the No Nestle Protest in Dalles, Oregon and NO Tesoro Savages protest in Vancouver, WA, and then soon traveled to NO DAPL protest at standing rock in the Dakotas. One thing I noticed is that these powers that be seem to not care about the environment just profits. So this song is a call for action to protect Mother Earth. I have featured on the Song Tanya Winder enrolled in the Southern Ute tribe, she is known for her writings such as “Words like love: poems” released in 2015.

Explain a little bit about yourself- where you are from.

I am enrolled member of the Confederated Tribes of Warm Springs of Oregon. It is located in Central Oregon about two hours from Portland, Oregon. I grew up on the Reservation where alcoholism and poverty is a norm. I realized at a young age I wanted to do something with my life than live up to the stereotypes. I gravitated towards sports and music. My friends and family always like socializing and listen to hip hop/rap music. I remember listen to “Ice T- colors”, for the first time and I fell in love with rap. Start getting hand me down cd’s and tapes from my older brother Gib.

What made you decide to turn to music?

I had a spiritual awakening of some sort at the age of 25. I guess you can say the veil was removed from my eyes. After that I made a choice to tell my story and that this awakening was just the start of my life journey. So in my songs you can hear me express myself, about the dark, and the light, the good and the bad. Life is about balance and I am trying to achieve that in my life; balancing my work and music is definitely a struggle at times. Ultimately music is my outlet and way to speak my mind. Music is a key, to influence the masses, a way to be a positive role model for people in my community and across Indian Country.

What’s the biggest shock so far since you started your musical career?

The amount of work that goes into creating music makes me appreciate music more. The hours of writing, recording, rehearsals, promo, it’s all not seen just the final product. So gave me more of a insight on music artist and what process they went through to create a master piece.

Who are some of your influences, musically or personally?

Growing up my mom listened to a lot of Marvin Gaye, Bob Marley, Red Bone, BB King, and Ike and Tina Turner. I feel like her music taste helped me appreciate the music before my time and musicians today. When I first started out I liked to study 2pac writings and poetry. Lately I’ve been listening to a lot of 90’s rap/hip hop Wu tang, 2pac, Biggie, Rappin 4 tay, UGK, and Mac Dre. I also like the new artists such as Kodak Black, Kid Laroi, and Rod Wave.

What is your idea of the overall image as a whole?

Image of the music industry is still fairly new to me. I see it changing and adapting to the times. I see cultures such as video games and music culture collaborating on big platforms. I think it’s a good opportunity for artists to get more streams and exposure

What kind of personal or musical goals have you set for yourself?

I hope to win a Grammy one day, which would be awesome to show my Native American people we can succeed in this industry. I recently set small goals such as receiving my first plaque for my single “Wash Away” which peaked at #6 on DRT music charts. The goals I am still working on are: Getting my music on commercial, video game, tv show, or movie. Get a viral song or music video. Finally my favorite is getting Nominated or Winning at the Nammy’s every year.

Do you have any kind of message that you are trying to convey through your music?

What is your view on streaming music?

Streaming music is good for the consumer but not so good for the artist. I wonder how it would be to be artists in the Cd era. I still have cd’s I sell at shows but mostly hand out to Dj’s and promoters kind of like my business card.

What is one of the hardest things you have had to overcome in your life so far?

Overcoming alcoholism was the hardest thing so far. It started off as fun and soon became a problem. I am currently 11 years sober and alcohol prevention specialist. I share my story during my prevention presentations and it seems to help others.

What are you listening to right now?

What do you do when you aren’t busy making music?

I help out my people where needed such as protests, fundraisers, music workshops, and mostly help run sweat lodge for my family. 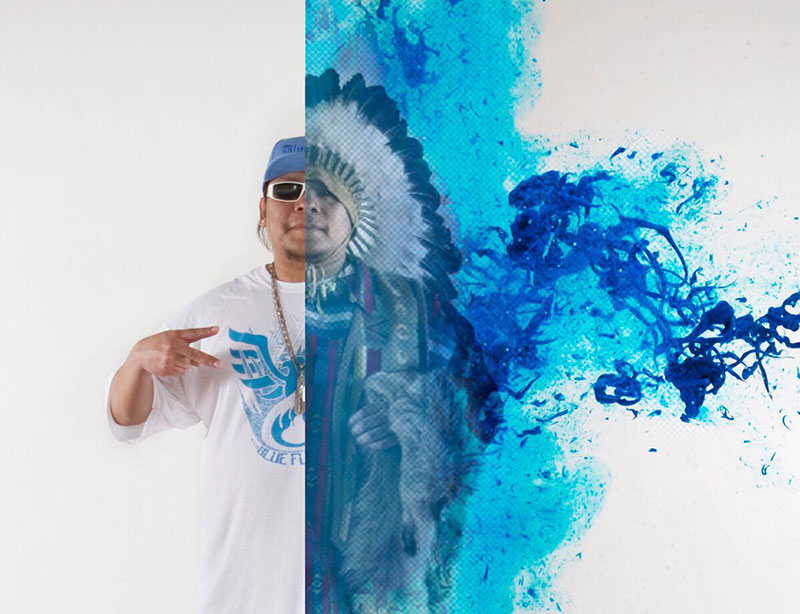 What is most important to you in your life?

Family is the most important thing in life for me. I hope to help out my family best I can while I am here on earth.

Where do you hope to be and to have accomplished in five or ten years?

I hope to be winning awards for my musical efforts and headlining a world tour.

Anything else you would like to add? Message to the fans?

Keep your head up and if you don’t know what to do PRAY.

I understand your award winning song Rez Life is being considered to be featured in season two of the hugely successful FX show Reservation Dogs, it is wonderful and amazing how many great things are happening for indigenous people due to the woke-ism phenomenon, as a result of the corona virus pandemic.

I think its movement in the making that’s long overdue. As a youth on the reservation I never think I’d see my indigenous people on TV commercials, MTV, and the news. So hopefully if all things work out, Rez Life the song from the Rez, will be celebrated across the map. It would definitely give me momentum to be heard and seen.