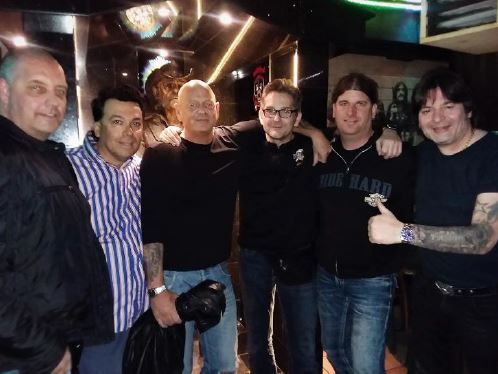 Gurrola pays tribute to the reformed band, currently on tour in Germany and promoting their show for the Tons of Rock Festival at the Opera in Oslo on Wednesday, June 26th, 2019. The showcase will feature famous pieces by classical composers like Beethoven and Mozart, arranged especially for the Heavy Metal world. Hoffmann will be supported by the Czech National Symphony Orchestra, as well as a classic set by ACCCEPT.

While ACCEPT is and has been a “very important part of Germany’s Heavy Metal scene,” according to Thomas Jensen, organizer of Wacken Open Air 2017, they also have significance to Gurrola’s ‘Mannheim Diversified.’ Pullheim, a city in Germany and also ACCEPT’s former street address of their management’s (Gabby Hoffman) company, was originally going to be Gurrola’s brand name.

Since the creation of ‘Mannheim Diversified,’ Gurrola has involved his company worldwide. ACCEPT’s expression in everyday matters, such as organized religion, race relations in America, the environment and nuclear annihilation was a mirror reflection for Gurrola in his accomplishments; all things that influenced Patrick in the coming of age period of the 80’s. It was no coincidence for Gurrola to see even the band’s website is acceptworldwide.com.

Gurrola is responsible for selling a Russian Space Shuttle Prototype, the BOR-5 USSR, that was one of “2 remaining 5 unmanned space shuttle prototyped used by the Soviet Space Program,” according to The Aero Trader in 2003. One of Patrick’s greatest accomplishments was his contribution to Expressen, one of two nationwide evening newspapers in Sweden, featuring Donald Trump.

‘Mannheim Diversified’ has been displayed in publications like the Times of London, The Mirror MAG, Eye Spy Magazine, as well as a host of other outlets including BBC Top Gear and Classic & Sports Cars Magazine. Recently, Gurrola has had a positive exchange with The Virgin Group.

Patrick’s interaction with ACCEPT’s enthusiasts only culminated a chance of meeting more devotees like those of the late Lord Lemmy Kilmister (Motorhead) and concert promoter Ossy Hoppe. While Brexit’s delay proves “lesser evil for May,” according to BBC, Gurrola only ‘hopes’ to further publicize artists and their concepts like ACCEPT, as he continues to spread news worldwide.

“Come on man, let’s stand up all over the world.” – Balls to The Wall, By: ACCEPT